Tidy it up Tuesday, Halloween Prep and Day #30 of Blogtoberfest!!

I wasn't going to do a Tidy it up Tuesday this week because frankly my house is in shambles - BUT after some self grumbling I decided to tackle our "other" Tupperware cupboard.  This one was even worse than the big one because it was such a small area that we OK ME was always resorting to the old 'toss then shut the door before everything falls out' method.  Since the first Tupperware cupboard looked SO good after I cleaned it and I'm tired of worrying that extended family members were going to open the small Tupperware cupboard and have a Ziploc tsunami I figured I had to clean the darn thing out.

I learned a LOT from this purge - 1.  I had WAY too many Ziploc type containers, 2. holy crap did I ever have a LOT of Ziploc type containers!  3.  I am so thankful that we have blue bin recycling so I could just automatically toss all the extra containers in the recycling and not be temped to rescue them for another use and 4.  I am starting to {gasp} actually like cleaning....!

I forgot to take a picture of the before - but trust me it would have probably scared the socks right off of you!  I did take an iPhone picture of the after and it just makes me happy looking at all that cleanness! 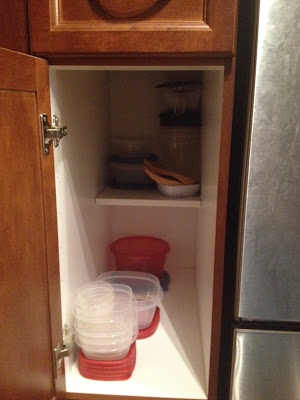 Total subject jump but tomorrow is Halloween!!  The girls are each going out as Tinkerbell and Mr C is going out as a Caterpillar.  Little Man hates his costume so it should be interesting if he screams the whole time or if he gets into it this year like his sisters did at this age.

We hit the store and stocked up on Candy - I hope its enough.....!  I heard from a neighbor last year that there were a TON of kids and they ran out of candy.  Plus since Mr. Quiltapotamus is working tonight I foresee a bit of candy snacking by myself while I get some UFOs worked on......but I didn't say that out loud! 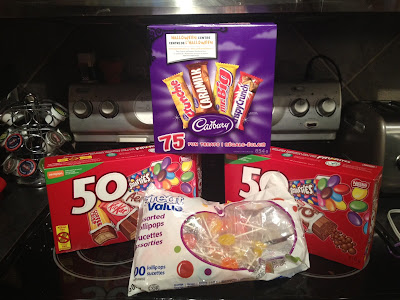 Thanks for stopping by - Day #30 of Blogtoberfest is done and there is only one more day to go!  And on a totally awesome unrelated note, Christmas is only 55 days away!!!

Posted by Kari @ The Purple Quiltapotamus at 5:11 PM

Email ThisBlogThis!Share to TwitterShare to FacebookShare to Pinterest
Labels: Tidy it Up Tuesday