Oye that cold white stuff is upon us.....and its only October 4th!!!  (Although I do have a confession that it snowed yesterday and only a little today....)
Thankfully the first snow of fall 2012 was just a super light dusting that didn't stick around at all - just enough to sprinkle the ground (that black thing in the lower left is an inflatable cat for Halloween - I tried to blow it up for the picture but the blower had water in it and I didn't want to short it out). 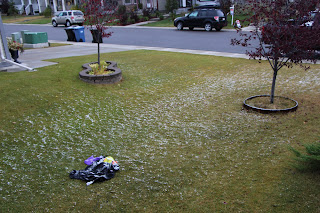 The kids playhouse and slide with a sprinkling of snow. 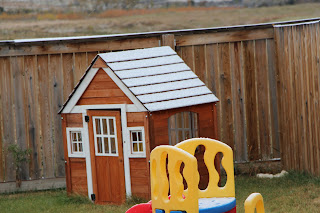 Mr. Quiltapotamus' truck had just a little bit of snow on it too. ﻿ 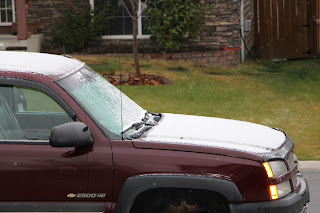 It was a little chilly dropping Miss S at school thats for sure but I know its going to be HORRIBLE come December and January with how cold its going to be.  Until then I'll take the light dusting of snow and be happy that I still see green grass!
Thanks for stopping by - Day #4 of Blogtoberfest is in the books!
Posted by Kari @ The Purple Quiltapotamus at 9:03 PM