Squaring Up Blocks - and day #8 of Blogtoberfest!!!

After at least a month of trying to figure out how I was going to square up the blocks for the Domestic Handbag quilt I finally busted out my ruler and decided that the first cut was going to hurt the most but after that it would get easier.
Unfortunately when I was sewing the blocks I wasn't as careful as I should have been and had some seams that were quite off and some squares that were a little too much on the wonky side.
It took almost an hour to square up 64'ish blocks but I finally got it done.
This is all that remains of the wonky'ness!!!! 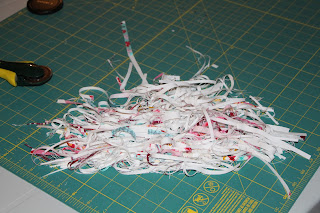 That pile doesn't look too impressive but I wound up having to go from a 8.5 inch block on most blocks (and in some cases they were even bigger) down to a 8.25 inch block.
I could have just sewed some extra blocks and used the super wonky ones on the back buuuuut I didn't!  I figured I'd just make them all a little smaller and hope it doesn't bite me in the butt when I go to sew it together this week!
Lets hope the hack and sew method works well for this quilt!!
Day #8 of Blogtoberfest is in the books!  Thanks for stopping by!﻿
Posted by Kari @ The Purple Quiltapotamus at 9:21 PM