I was all set to get some serious work done on the top of my Domestic Handbag quilt last night when all of a sudden in the middle of a quilting pass my machine makes a horrible noise (you know the one where all you can do is freeze and not breathe hoping that the tangle won't be too bad!) and I look down to see my needle has jumped out of its shank (is that what the needle holder is called?!?!) and is lying BENT, partially under the walking foot.  I wanted to die - this was so not what I needed!!! 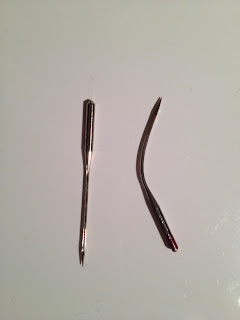 The needle on the right was the one that bent - and boy did it ever bend!!!  The one on the left was the replacement and I thought that I would just be able to throw it in and be back on my merry sewing way.

I put a test strip of fabric in just to make sure that everything was hunky dory and sure enough my machine ate the test fabric and made some serious chunking noise.  Thank goodness it didn't eat the quilt - I would have cried and probably proceeded to beat my sewing machine!  I tried fiddling with tension, re-threading it, turning it off and back on (hey, it works for my computer) but it wasn't working so I decided to take it one step further and busted out the tools!! 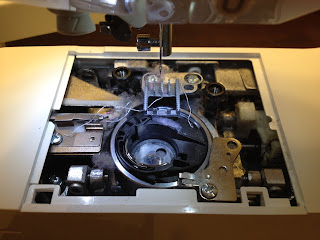 Its been a year and a half since I serviced my machine and WOW was there ever a lot of lint in there - I've never taken it apart before but I saw a post in the last few days on machine maintenance and figured that I should give it a good lint cleaning.  Oh my heavens was there ever a lot of lint in there in addition to a few random long threads.  After I took this picture I took a clump of lint out that was almost the size of a Canadian Twoonie from under my bobbin case, it was crazy just how much lint got under there. 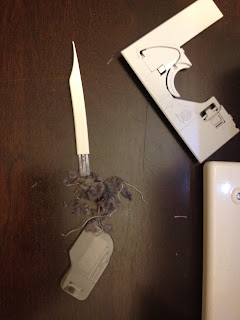 Also I took off the side cover to see if there was anything up there that was causing the thread to be tight or something - it looked ok.  Or so it did to my very un-educated sewing machine repair person eyes.  ;)﻿
﻿ 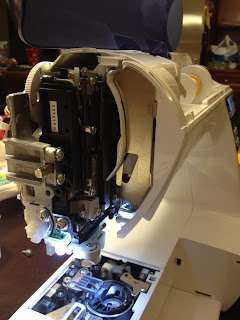 After I put it back together - all in one piece I should add - I did a few test strips and my machine didn't eat my fabric but I just didn't trust it for the night and it was already getting late. Its been my experience that major mistakes usually happen after a minor mistake and when I'm tired so I thought it would be best for all parties involved if I just went to bed.  I'm hoping that it will behave this evening, I will do quite a few test lines to see if its fully fixed before I start back at the machine quilting.  Wish me luck!  ;)


Thanks for stopping by - see you tomorrow!
﻿
Posted by Kari @ The Purple Quiltapotamus at 8:41 AM