Pinterest - have I mentioned before how much I LOVE Pinterest!?!  I use it as a digital pinboard for things that I would love to create, make, bake, sew, do with my kids....but every once in a while (usually when Mr. Quiltapotamus is working nights) I get a little click happy after the kids go to bed and next thing I know I've been on there for an hour and have no idea where the time went!  There are so many cool things that people pin and a big one is Mind Jars, the most popular pin sources back to Here We Are Together although I found a few others just randomly clicking through some sewing/crafting blogs that I follow.  The premise of a Mind Jar is to help calm or soothe a child or adult.  I stumbled across these again last night and thought that my house could use one or two (or five like we wound up making!!!).

Edited to Add:  I have had a few e-mails and comments asking what exactly a 'Mind Jar' is.  The best explanation that I have is they can be used to "calm the minds of children when they may be afraid, anxious or just having a rough day and need a distraction to zone out to."  I have been using it with the girls when they are getting a little out of control and have them shake the jar, set it on the kitchen table and wait until the glitter settles before they can get up from the chair.  By the time they have stared at the glitter for a few minutes they have refocused and aren't quite so wound up.  I have also tried to get them to tell me what colors they see (since we put different colors of glitter in each jar) and have tried to get them to watch a single 'grain' of glitter for as long as they can.
﻿﻿﻿
I read all the supplies on a few different sites and as usual thought to myself that I'll do it my way and see what happens!  I'm not a huge fan of measuring (which is funny since most of the quilts I do are quite meticulous, but that's probably why I mess up frequently!!) so I thought I would use the "eyeballing it" method and hope for the best.

Mind Jar Supply List:
The first Mind Jar I made I threw everything into the jar, shook it up and called it a day.  Then I noticed that some of the glitter was clumping together which made me realize that perhaps a whisk might be a good idea.

Then on the second, third, forth and fifth go rounds of the Mind Jar I made a few changes and quite liked how it turned out and we had a pretty good little system down by then. 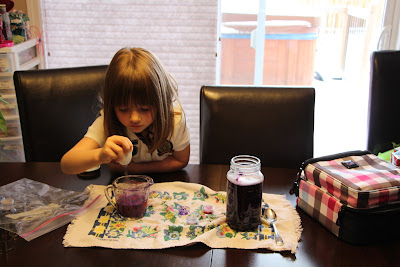 Voila!  There you have it - a super simple, fairly loosey goosey tutorial on how I made our Mind Jars.  The green one was the first one I made and its SO pretty!!! 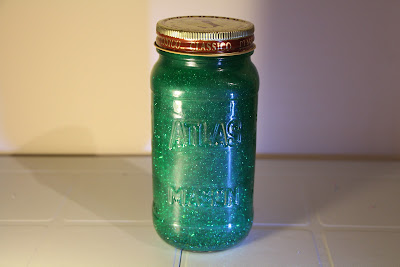 We went NUTS on all the glitter inside the red one - I think we had gold, red, pink, white and a dark burgundy glitter that we threw in.  This one had the most corn syrup in it as well as the most glitter so it suspends the glitter much longer than the other jars 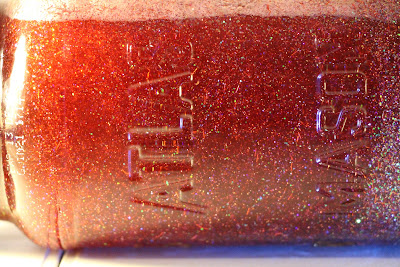 These are the Jars after they have settled, the bottom left one is actually the purple one - it doesn't look all that pretty when its not shaken up but its probably my favourite when its freshly shaken.  You can see how much glitter is in each jar if you look at the bottom - the red one is CRAZY glittery!! 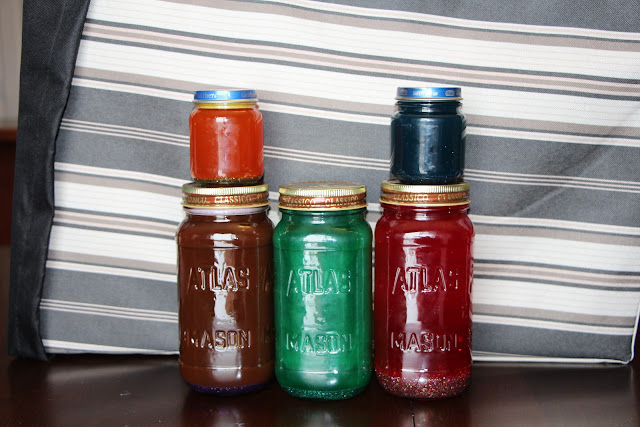 Thank you so much for stopping by - please leave me a comment if you have any questions about the tutorial - I've never done one before and I hope you found it helpful!
Posted by Kari @ The Purple Quiltapotamus at 9:19 PM