Two and a half years ago my Sister-in-Law and I took a quilting class at My Sewing Room in Calgary, it took me over a year after the course was over to get up the guts to finish my Bug Quilt.  My Sister In Law got back into crocheting and the Party Monster Quilt was set aside until last week when she asked if I wanted to finish it.  Of course I jumped at the chance - its such a cute quilt its a shame to have it not be finished!  Not that I am one to talk since I have no less than THREE unfinished quilts waiting for me to get to them in my basement - but I digress, this is about the Party Monster Quilt not my serious lack of finishing quilts!

If the Party Monster Quilt looks somewhat familiar, its because its the same nine patch pattern as the Monster Quilt I made for my nephews baby shower back in April. 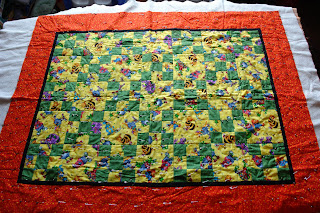 The monsters make me laugh - they are just so cute!!! 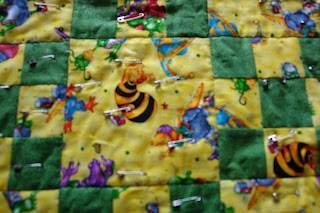 The little pinky/red Monster in the centre block is beyond adorable and so are the big bees! 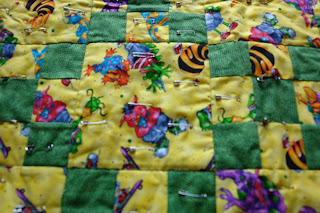 The backing is a nice bright orange with outlines of the same monsters from the front. 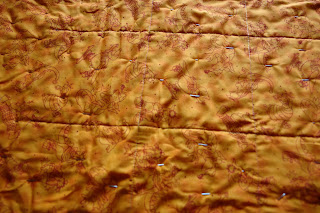 It has already been 'mostly' quilted.  All the major blocks have been 'stitched in the ditch' but I'm not sure what I am going to do across the 9 patch blocks.  I have been pondering doing more ditch quilting but part of me is thinking this quilt would look cute if I sewed diagonally across each 9 patch block and have it mix up all the parallel lines a little bit.  One day I would LOVE to try some sort of free motion quilting but I don't think this quilt is the one to try it out on - let the monsters be the centre of attention and the quilting just be the background.

Hopefully I can add this to the stack of my UFO's that I have that are mentally kicking my butt lately and have it done fairly soon if the kids let me get some sewing done!
Posted by Kari @ The Purple Quiltapotamus at 2:49 PM