After my epic fail on Wednesday I have been shying away from my sewing machine the past few days worried that I was going to screw up on this block yet again BUT I finally got some sewing done tonight on my Quilt along hosted by Skippity Do Dah Quilts.

I did mess up on cutting or sewing (still not sure which!) the 3 7/8s squares but I managed to do a little workaround and they wound up working.   I really like to lay my fabric out as I go along to make sure that I don't mess up too much along the way. 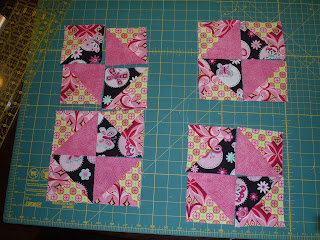 Even though I said I like to lay it out before I sew it - sometimes things get flipped around!  Sing it with me now 'one of these things is not like the other....can you tell me which one....?'.  Yep, you are right, the pinwheel on the bottom square isn't a pinwheel.  Enter seam ripper. 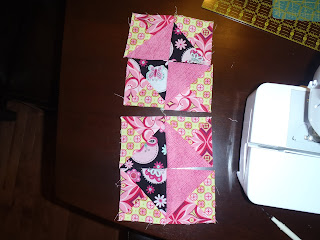 The top all pieced together.  I do like it but I had originally planned on using the dark fabric in place of the green and pink circles but I managed to mix things up yet again and rather than cutting MORE fabric I decided to go with the fabric that I cut. 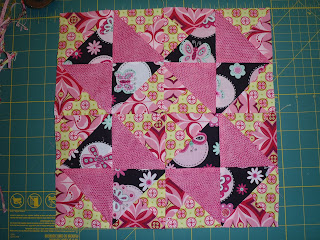 The final block in all its glory!!! 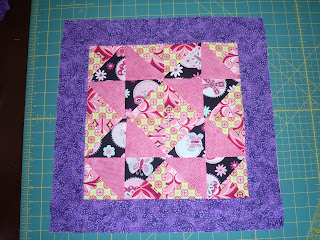 The first two of the twelve block quilt along finished!  Its CRAZY busy and crazy colorful but I think I'll be giving it to my 4 year old daughter and what little girl doesn't love a ton of color in a blanket?! 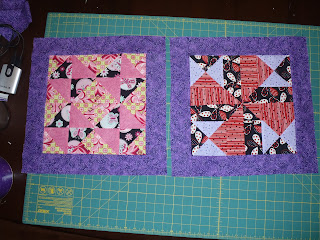 I'm having issues cutting 7/8s of an inch - HOW DO I DO IT?!  Is there a certain ruler that clearly shows the 7/8's of an inch or is there a quick cheat way that I can do it without messing up?   I have been using the tiny (what I think is the) 7/8 marker on my big Omnigrid ruler but that didn't give me the right sized block.  One thing for sure - this quilt along is totally teaching me new things!!
Posted by Kari @ The Purple Quiltapotamus at 9:49 PM

Email ThisBlogThis!Share to TwitterShare to FacebookShare to Pinterest
Labels: Skippity Do Dah Quilt Along