How does my Garden Grow?!

As much as I have tried to ignore it I have been bitten by the gardening bug this year...!  Because I can't tear up the back 6x8 foot patch that I really wanted to this year I've decided to go the container garden route instead.  I've always wanted to be a gardener but for some reason (probably due to having a purple thumb rather than a green one!!!) I usually manage to kill my plants without much effort.  This year I REALLY want to have a container garden that I can actually harvest some food from - even if its just a few nibbles here and there.  Nothing beats food straight from the garden!!

We hit the garden centre on Friday and picked up some flowers, strawberries and tomatoes.

The flowers are in the planter box - its not in its final home on the deck, I'm still not sure where its going to go but its pretty on the deck stairs for now. 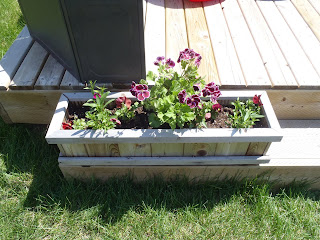 We picked up a pretty big tomato plant, hopefully it won't take too much for it to start producing some fruit!  The girls are pretty excited for the flowers to turn into tomatoes. 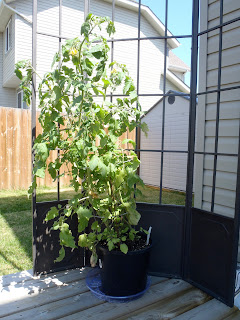 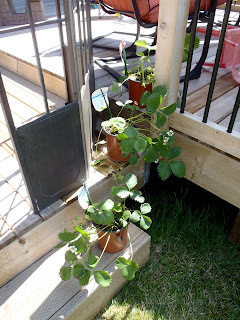 My SIL has asked me to watch my neice's tomato plant while they are gone on holidays next week so we planted it in some soil and gave it a pot to grow in.....and now I'm PRAYING that I don't kill it before they get back from holidays!  Its just so cute and tiny in its little pot! 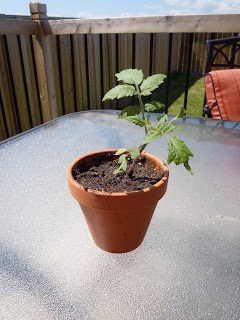 I really want to go out and get a ton more plants but I think I should take it one step at a time and if I don't kill my plants that I have right now maybe I can do a little more next year!
Wish me (or should I say my poor plants!) good luck!
Posted by Kari @ The Purple Quiltapotamus at 3:33 PM

Email ThisBlogThis!Share to TwitterShare to FacebookShare to Pinterest
Labels: Garden