I can now say that after years of wanting to I finally completed my first rag quilt - and I think its super cute!!!!

I have been cutting the fabric for the Dino Buddy Quilt for the baby over the past few days (even had Miss S help with the lint brush yesterday!) with my Accuquilt and tonight I sat down and figured out the inner workings of a rag quilt and pieced it all together.  I've been wanting to make a rag quilt for at least 5 years but I always get sidetracked and move onto a different project - now that I have my Accuquilt I'm glad I waited since it was actually quite easy (and much easier on my fingers after reading some blogs and hearing how time consuming it is to cut the individual fringe on each square).
Once I had all my squares cut out I had to figure out my 'random' pattern - I LOATE doing random patterns....I tend to overthink the simplicity of them and worry that the dot fabric is too close to the square fabric and that I have too many blues and not enough greens in one corner.  That being said I promised myself once I laid the fabric down I could only make a few changes before I had to stick with what I had down on the floor - otherwise I would have been there all night arranging fabric!! 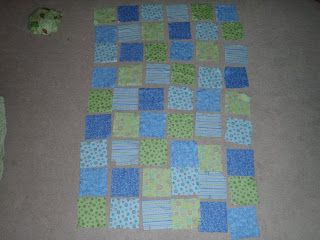 I guess I overestimated the size of the finished rows - it wound up being quite a bit smaller than I thought it was going to be. 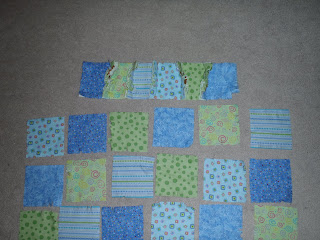 After I had all the rows pieced togehter I realized that it was WAY too narrow and way too long.  Thankfully I cut just enough extra squares to add as boarders on the outside edges of the quilt.  Then I had to dig out the cutter and cut the backing squares for the 16 extra Dino squares.... 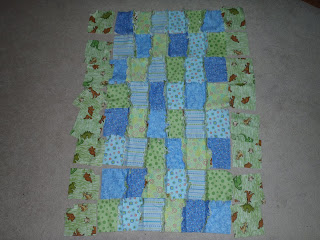 All the rows in their pieced goodness....!! 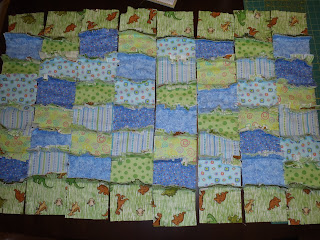 Whats a quilt project done by me without a screw up?!!  I mean its a miracle that I made it as far as I did with this quilt before I made a mistake.  I have never done a rag quilt before and couldn't figure out how to piece the rows together - and apparently I pieced the wrong sides together.  Thats ok, a few seconds with a seam ripper and I was back in action and the one and only screw up was behind me!!! 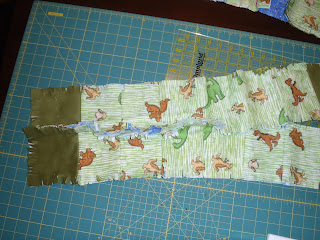 The finished Dino Buddy Quilt!!!  I'm quite happy with it.  I need to throw it in the washing machine a few times and then take it outside so I can get a better picture of it but I'm quite happy with the way it turned out.  Its a little wonky in size but I figure that will be hidden a little better when I wash it tomorrow.  Next rag quilt I'll put batting in since this one is pretty flimsy BUT I'm not really planning on using it as his full time blanket - just a throw for when hes on the floor, a stroller cover, or when we just need a blanket for him for snuggle time. 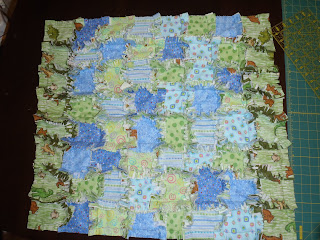 The back - I decided to do the left and right edges as the dark green to mix it up a little bit - plus I ran out of fabric so it was the next best thing!! 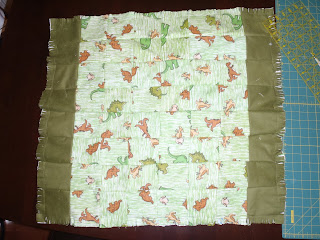 I can knock off one more thing on my Work In Process List which is a good thing since I've got so many things I want to do and at least 5 blankets that I have in various stages of completeness that I need to finish.

Its so awesome to get this blanket done, I lost my sewing mojo for a few weeks but it seems to be coming back.  I just need to find a better corner of the house to set up my sewing stuff in since its such a pain to have to set it up and tear it down off the kitchen table each time I want to sew.  Maybe I'll take over the bonus room and be able to watch the big screen while I sew!
Posted by Kari @ The Purple Quiltapotamus at 12:44 AM