Another Friday Night Sew In is in the books and thankfully I got to work on a little bit of my Eye Spy quilt (I wrote this last night but fell asleep before I posted it, hence why I keep saying tonight instead of last night throughout the post).


I left Baby C (whos almost 5 months and not so little anymore!) to sleep on Daddy while he watched the Barrett Jackson Auction on Tv for a little bit so I could get a little bit of sewing done in the peace and quiet and I can honestly say that an hour of quilting was EXACTLY what I needed to get my head on a little straighter.  I've been feeling horribly guilty for not touching my sewing at all in what feels like months but between finishing a basement, Christmas, a family vacation to Disney World for 10 days and life with three little kids it seems like sewing is beyond the last thing that I can find time for.  Being able to sit down and get even a little bit of sewing done (I got an hour in before Baby C needed mommy for food) was so awesome.

I think my major downfall when it comes to sewing is that I tend to 'wing it' a little too much - tonight was no exception.  I'm the type of person that wants IMMEDIATE SATISFACTION and I want to see the finished product after I've been working on a quilt for 5 minutes.  Rather than sitting down and doing the math for how many squares I need to do each part of the quilt I did a few of each step so I could see how its going to turn out.  Sometimes it works, and sometimes it bites me in the butt.  Tonight thankfully I only screwed up on one square (and really whats a quilt without at least ONE screw up?!?!  ;)) and since its an eye spy quilt I figure it will blend in, or I'll just put it somewhere near the bottom and hope the kids don't notice!
I got a whopping 8 squares done tonight, its more than what I've done in the past month so I'll take it.  Hopefully I'll be able to sit down and get some more sewing done this weekend - its good for the soul. 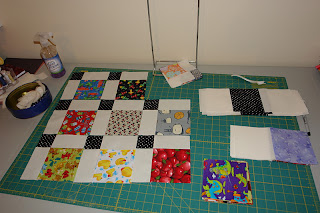 Posted by Kari @ The Purple Quiltapotamus at 9:05 AM