What do I do on a Friday night - I sew whilst my husband is out with his brother and Dad at a Movie (that I really wanted to see...but oh well, pity party is over - we can rent it when it comes out, I was really bummed that I missed out on the movie theatre popcorn!) and attempt to make some progress on my Summer Wall Hanging.

I'm having mixed feelings about this one so far.....its cute, but I'm not sure if its big enough, if Its got enough contrast, how I'm going to finish the top, what boarders I should do....and the list goes on!  I think it needs to get put away for a little bit and then I can ponder (or maybe make one more row of pinwheels and solid blocks?!?!)  what to do with it after I've had a few days away from it.

I started the day with these made: 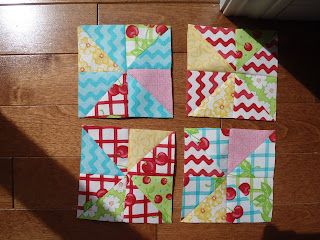 Then I cut my solid squares, squared them all up and started to assemble them into the quilt top. 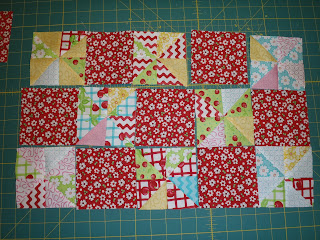 The finished top, I like it but I still feel like its missing something....not sure what but I'm just not 100% happy with it. 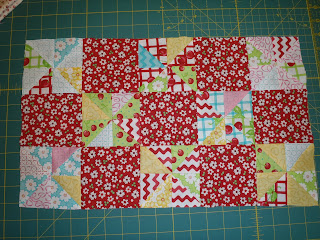 I was trying to figure out what boarder to use, the white is a nice contrast but the red is nice and bold - but there is no definition between the quilt top and the boarder. 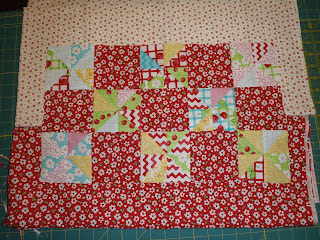 I think I like the white boarder with red binding - that way they both stand out and there is still that awesome pop of color.  Still - something is off.... 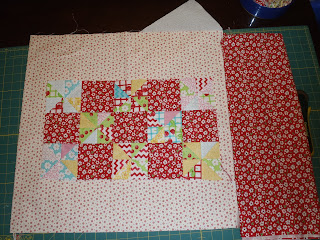 AHA!  Its amazing what happens when you are trying to clean up and write a blog post at the same time - INSPIRATION!!  I found two extra pinwheels hiding under my cutting mat and I realized if I took the two pinwheels and three solid squares I had enough for one more row....and I think it was exactly what the quilt top needed!! 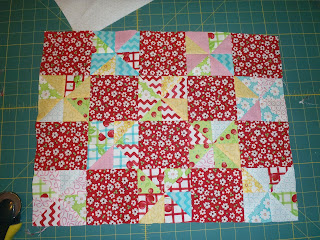 If I couple that with the white boarder (still not sure how big that is going to be - maybe 1/2 the width of  a row?)  and then do the red binding it will be pretty cute.

Its not going to be very big (how big does it have to be to be classified as a 'wall hanging' and not a really big placemat?!!?!) but I think it will be something like 20x24 inches which seems to be a pretty good size.

Its amazing how I can go from not really digging this quilt at the beginning of this post and before I started cleaning up to quite liking it 30 minutes later.  Its funny how a combination of being over tired and cleaning can clear things up!

Now its time to finish cleaning up and maybe I'll attack this quilt tomorrow or maybe I'll give the Crazy Cat Quilt some love since its been neglected for a few weeks after some serious progress!
Posted by Kari @ The Purple Quiltapotamus at 11:18 PM